From 1956 and across the ocean comes this sales brochure for the Mercedes 312 diesel truck, with typically beautiful artwork and design from cover to cover, as well as one characteristic maddeningly absent in American sales literature from the era:  Four-color printing in perfect register on every page.

Exactly three decades ago the first Diesel truck left rattling and chattering the plant. Nobody thought that this kind of engine, which already at that time demonstrated convincingly its economy, would ever be used as a power plant for passenger cars. And yet, standing today by the side of the road, only a keen observer and expert can distinguish a Mercedes-Benz Diesel car from a conventional gasoline automobile . . .

With its center-hinged doors and transverse-leaf front suspension, the Mercedes 170 S-D was about as cutting-edge as a farm tractor. But, giving good service and excellent fuel economy, the car and its offspring have sold millions of copies around the globe.

If this is your first visit to Plan59, welcome to the site! And thanks to the nice people at Yahoo! for sending you our way! We wonder how much of its success Yahoo! owes to that cheery exclamation mark, or if we need our own punctuation. Plan59? (Hm. Maybe? Not?)  Plan59;  (the semicolon will be big one day, but that day is not here)  Plan59:  (too anatomical)  Plan$59 (too obvious)  Plan59  . . .  (we dig the ellipsis, but  . . .  ) Minimalists that we are, we’ll stick with that period between us and the com.

≈ Velvet Smooth and Full of Ginger!

This sweet, smooth and sassy new Chevrolet has its own special way of going. It’s spirited, sure  . . .  but a honey to handle. And if the roads your way suddenly seem newer, that’s Chevy’s new ride! We might as well own up to it — there’s a certain restless energy about the new Chevrolet. It’s not the stay-at-home type at all. Even when it’s parked in the driveway, you can tell it’s poised to travel. The plain fact is, this beauty’s full of vim and vigor and V8 action! (Horsepower, and how, ranges up to 245.) But for all its fresh and frisky ways, Chevy’s a real solid citizen on the highways.

We’re on early midwinter break this week, with posts resuming (and how) next Tuesday. In the meantime may we suggest the world’s best Old West history site, GhostCowboy? Gid ’yup. 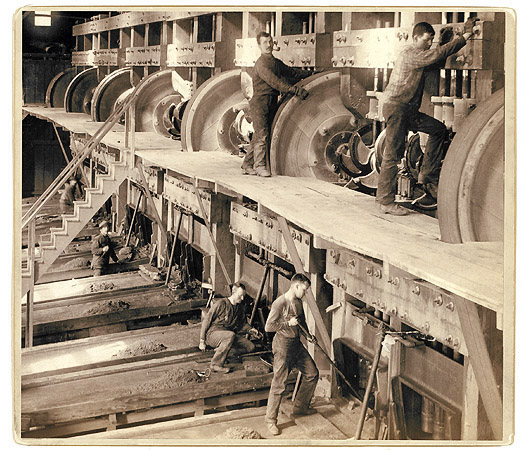 In case anyone was wondering about the dearth of posts this week, we’ve been down in the workshop nailing together a new Web site. Ghost Cowboy has marauding Indians, “ravished” maidens, lost gold mines, poor California Dan.

The top offering (in our book) at the Barrett-Jackson auction being held in Scottsdale. We can dream, can't we? Click below for more. Drool bibs advised. 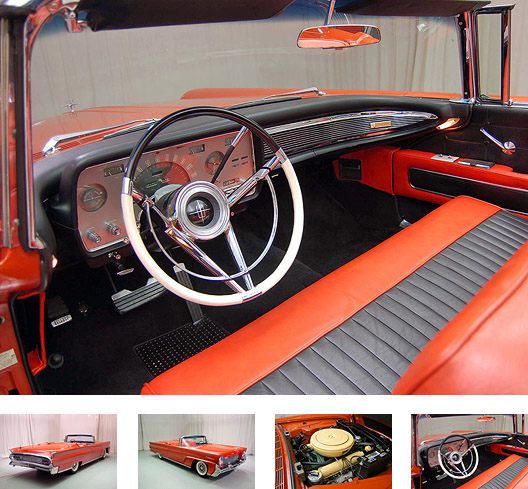 Since 1892, when the first motor fire engine was built by Gottlieb Daimler, the firm have carried on the evolution of these types of truck with outstanding success. Each kind of truck, from the self-loading road sweeper to the sewage disposal truck, from the ladder truck to the fire-fighting truck with tank, is outstanding by reason of its superior performance and economy  . . .

A 1952 illustration by Hans Liska, showing that artist’s curious curved speedlines emanating from the front bumper.

What’s German for “kaboom”? From 1955, a nice illustration for the Mercedes-Benz Type 315 line of heavy-duty trucks.

A Mercedes motor coach from the mid-1950s somewhere near Lake Como.

Don’t have a carload of traveling companions? This Mercedes-Benz Type 220 sales brochure from 1954 advises that “with a radio in your car you will never feel lonely.”

“Millions of bacteries accumulate wherever people live together in congested areas. In rubbish and dirt of various sources, bacteries find an ideal nutrient medium and form a constant menace to public health. To abate this danger, men and machines are faced by a task, the solution of which presupposes on the one hand rich experiences and on the other hand the best material that can be had, prerequisites embodied in Mercedes-Benz utility vehicles. Please request our special folder on garbage trucks.”

Both of those hands are probably dripping with “bacteries.” At the far end of the Mercedes glamour spectrum: The Type 325 “Mud Reservoir With Suction Outrigger Sewer Vacuum.”

This 300 S sedan comes from a 1952 sales portfolio illustrated by Walter Gotschke (1912-2000),  longtime art director for Mercedes until his retirement in the 197os.

The Mercedes-Benz “300 S” is a car which not only thrills the sporting driver, but also makes it possible to cover long distances in a short time and with the least exertion. Three persons can easily be seated in the front; three children can be seated on a leather-cushioned bench behind the seats. This rear bench can also be folded back, providing an additional large trunk compartment  . . .

The model years 1955 to 1960 were something of a four-color golden age for truck brochures, with elaborately printed offerings from each of the Big Three, heavy on the primary hues. Here, the cover illustration for a GMC sales folder printed in 1955.

An example from Chevrolet’s 1958 “Task Force” series of brochures, the cover illustrated with this swoopy rendering of the Model 3104 (Apache) pickup.

There’s smart new style in every line of the 1960 Ford Courier — from the bright new grille to the wider, easy-opening tailgate. Loadspace is nearly ten inches longer than last year, and three inches wider — for a whopping 97 cubic feet behind the front seat.

By 1960, the final year for the Ford Courier sedan delivery, the body style had evolved from van-car hybrid into what was basically a two-door station wagon without a back seat.

This pert little portable is cheerful as a pot bellied stove, with the decorative charm of an attractive trivet. Whether your decor is early American or modern as tomorrow, this new Wesix heater will compliment any room with its handsome beauty. It’s a “conversation piece,” daringly different, yet designed with your furniture in mind  . . .

The Wesix “Fireball” from 1957 looked like a little Sputnik and came hot on the heels of the company’s “Smoking in Bed” electric blanket and “Identified From Dental Records” bathroom heater.

Chapter titles include “Dizzymaking,” “Time to Be Pretty,” “Chilly Sauce,” “Dear Diary” and “How’re You Doin’ Toots?” The ideas are “for knitting and crocheting.”