Featured on the TV screen of this 1949 illustration: “Miss Kyle MacDonnell — starred in the Bates Fabric Program, Girl About Town, on NBC Television.” She was also dubbed Miss Television of 1948 by Life. 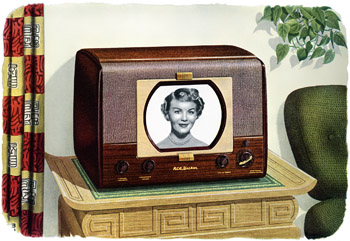 The office with a roll-top desk is as dated as a Cupid’s statue on the lawn. For modern living reaches out everywhere  . . .  from the casual magnificence of the glass-walled home  . . .  to the spacious simplicity of the glass-walled office. And now, there is the practical elegance of the distinctive new Lincoln to fit in with the modern American scene. This is more than an unusual car  . . .  or a showpiece car. This is a car built to drive in, as much a result of functional planning as the finest modern home or office. It is clean-lined, trim — without pretentiousness. Spacious — without waste space. A big car — but it handles as easily as a small sports car. This is beauty set to the tempo of the times  . . .  graceful, open, free  . . .  that adds to the joy of driving with an easy-view instrument panel  . . .  almost 30 cubic feet in the luggage compartment  . . .  and with a revolutionary new V-8 engine. See the new Lincoln Cosmopolitan and Capri at your dealer’s showroom. Ask him for a demonstration drive with the one fine car deliberately designed for modern living.

Painted by Slayton Underhill, “master of the hat,” this clutch of illustrations for the 1952 Lincoln took as their point of departure the glass-walled Lever House, “New York’s newest skyscraper.” 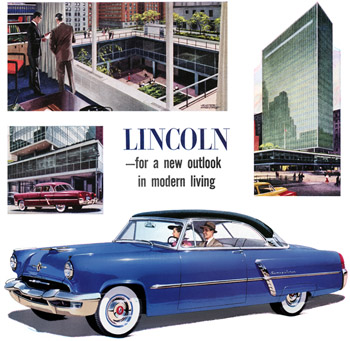 Here’s a new locomotive you're going to hear a lot about, and see a lot of. It’s the new General Motors E8. Behind its gleaming stainless steel grilles are scores of improvements born of more than two-billion unit-miles of General Motors Diesel experience on the rails. It’s capable of greater sustained speed with a smooth, steady flow of 2250 horsepower from each dual-engine unit  . . .

From 1950, a nice rendering of a diesel engine by Blaine for the General Motors Electro-Motive Division in La Grange, Illinois. 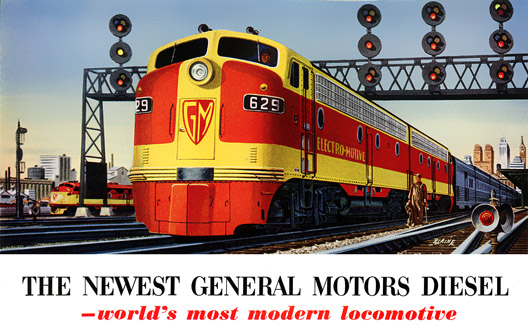 ≈ This Rainbow, Too, Means Sunshine!

Aboard giant DC-6 Mainliners with the famous red-white-and-blue propeller tips, you fly where the weather is best! In addition to its normal coast-to-coast route, United can choose from a system of multiple routes, made possible by the range and power of this airliner. United’s multiple routes — all marked by radio beams for precision navigation — permit flying as far south as Texas, as far north as Montana. This powerful Mainliner can also fly at high altitudes, over the weather, with pressurized-cabin comfort for you  . . .

From 1952, an illustration from the days when commercial aviation was entering the mass market for long-distance domestic travel. Within a few years the railroad passenger business, mortally wounded, would be on life support. 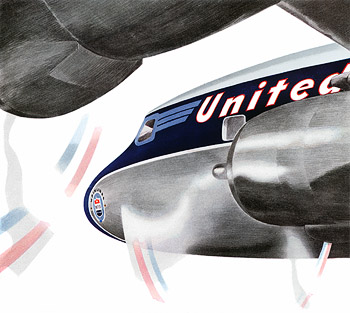 A 1952 Coke ad, probably illustrated by Haddon Sundblom. Photoshop and Illustrator have a way to go before they can begin to even touch work like this. 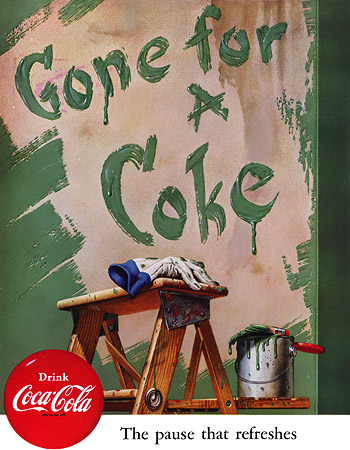 ≈ Ask for the Stetson Playboy

Simple, smart, trim lines that have a way of looking well with everything you wear, whether you’re going to your office or a football game — that’s the popular Stetson Playboy. It’s a soft, lightweight, correct hat for the man-about-town who insists on being well-dressed, who insists on a hat that accents his own individual personality  . . .

From 1950, another of Stetson's nattily hatted gents, this one topped by the company's $10 Playboy fedora. 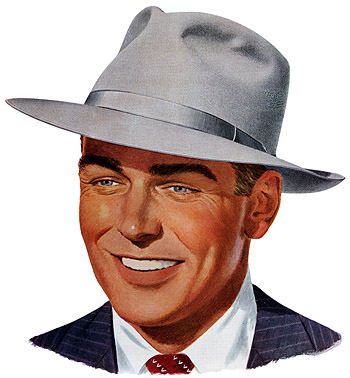 A colorful convocation of 1950 Chevrolet trucks at the dairy farm as painted by the famed automotive illustrator Peter Helck (1893-1988). 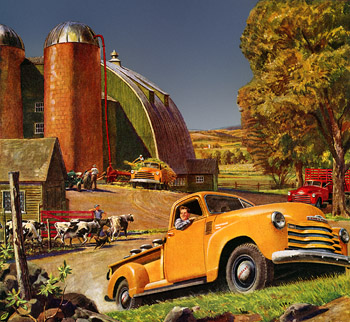 ≈ The Joy of Sets

There is great happiness in television  . . .  great happiness in the home where hearts are lifted by sharing family pleasures. And for those who would know the fullest measure of television enjoyment, and see its stirring pageant in thrilling clarity, the Allen B. Du Mont Laboratories build television’s finest instruments — the Du Mont receivers. Everything a television set can be, everything it can offer, is yours in a Du Mont. Your Du Mont dealer invites you to see the Morey Amsterdam Television Show on the Du Mont Television Network — consult your local paper for time and date.

A 1950 illustration by Norman Rockwell for Du Mont Laboratories, whose New York-based network and television sets were big names in the early days of the medium. We think the kids might need a timeout. Not to mention their meds. 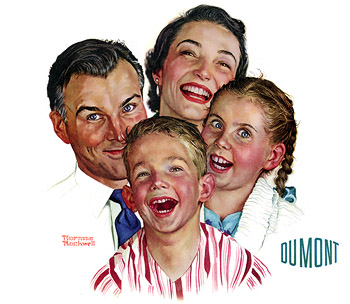 ≈ The Edsel Is on Its Way

If you happened to be up in northern Minnesota last year, it’s just possible that you might have noticed a covered car cruising smoothly along out-of-the-way county roads.

You would know if you saw it, because this automobile didn’t look much like the usual run of cars you find around Bemidji.

Or maybe you were one of the few who chanced to see such a car roaring wide-open through the sand and mesquite under the high, hot Arizona sky. And recently, more than one filling station owner in the Cumberlands has forgotten to say, “Fill ’er up?” in his hurry to ask, “Hey what kind of a car you got there?”

Edsel is the kind.

Maybe you thought none had been built yet. But if you did, you were wrong. For almost a year, the first Edsels have been chalking up miles. Miles of pavement and of no pavement. Of mud and slush. Of mountain and flatland. Of sub-tropic heat and sub-zero cold.

Not thousands of miles. Hundreds of thousands.

By the time it reaches your streets, the Edsel will be one of the best-tested, best-proved cars in automobiling history.

And that time is not far off. The EDSEL is on its way.

There's an entertaining article by Peter Carlson in today's Washington Post commemorating the Edsel’s ill-fated debut, with a nifty illustration provided by yours truly.

Early this week, a group of big automotive carriers cleared the yards of six giant U.S. plants and rolled out into the night. Balling the jack. Because their steel racks held something they had never held before.

They were loaded with a new kind of car.

With four series — eighteen models — of a new kind of car called the Edsel.

And the delivery date is urgent.

Maybe you'll see some of these carriers loaded with covered cars on your roads in the next few days.

If you do, you might call to mind what one of their drivers said before he started out. The driver lifted the cover on one of the Edsels in his load and looked it over very carefully. And what he said, plainly and forcibly, was:

“Man, would I like to have one of these.”

Fifty years ago today a new car was launched in hundreds of showrooms across America, capping a months-long advertising campaign that cost Ford millions. When the dust finally settled some two years later, the company had lost a quarter-billion dollars and the annals of marketing had acquired a new proper noun, somewhat along the lines of Titanic or Quisling: The Edsel. 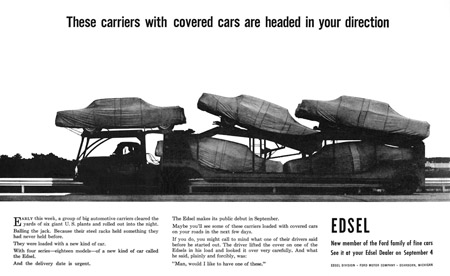 Record lovers — here is the record changer that sets you free forever from the nightmare of speeds, sizes, attachments and adjustments! Zenith engineers have now brought you an automatic changer — the new “Cobra-Matic” — so unbelievably simple that you simply won’t believe it! You touch one control knob — and set it for any size record — 7, 10 or 12 inch! You touch the other control knob — and set it for any speed! Yes, for 33⅓, 45, 78, or any speed from 10 RPM to 85 that the modern world may dream up! And what a glorious outpouring of tone will greet your ears! Zenith’s new Super-Cobra, resting a mere fifth of an ounce on the record, brings out startling new tonal beauty — reproduces music on a Radionic wave like no other method you have ever seen or heard  . . .  with two simple controls a six-year-old can operate!

Our only question: What if you don’t have a six-year-old? 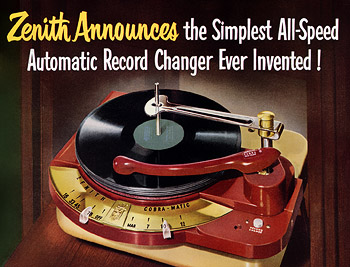 Lively? It’s the liveliest Fire Chief gasoline ever! You’re off in a flash of pepped-up power. Split-second starts  . . .  hurry-up getaways  . . .  hill-climbing pull aplenty. What’s more — it’s regular priced. Get ready to GO. Fill ’er up with Fire Chief at your Texaco Dealer  . . .  the best friend your car ever had.

And all we can say here is: GO DOG GO! 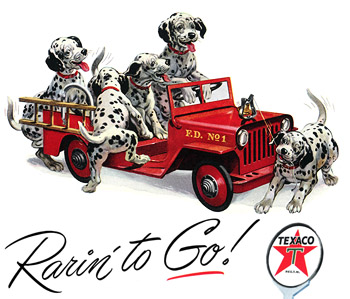 You smile and say hello. Ask how are you? Laugh and say oh that’s wonderful! Tell the news. Say I love you. Make one another feel good. Try it. The nicest things will happen. And the rest of your day will be happier because you called.

Throughout the 1950s Pete Hawley specialized in hot girls cooling off in Jantzen swimwear. Starting in 1958 he switched to a dame of a different description — considerably younger and (gasp) topless, the babe known as Betsy Bell. 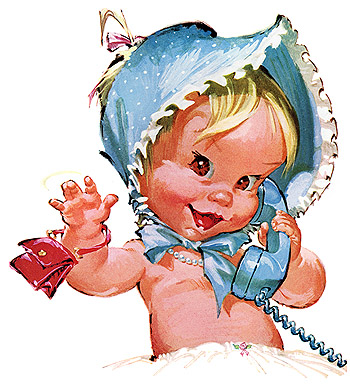 Parked in front of your art moderne house, the 1941 DeSoto was sure to win the admiration of friends as well as an appreciative leer from the gardener, who was always a little strange. 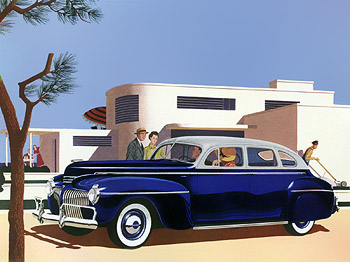