An exceptionally colorful illustration from 1954 for Chevrolet trucks, which offered “Thriftmaster” and “Jobmaster” engines as well as a “Comfortmaster” cab. 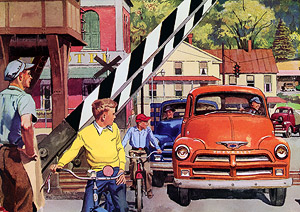 ≈ Delray by the Lake

The family in the picture has everything it takes to enjoy a wonderful vacation — a fine place to go and a fine new Chevrolet to get them there. In fact, no other car fits so beautifully into all your family activities all the year ’round  . . . 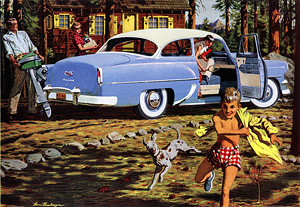 Their furnace is 93,000,000 miles away! Literally. For this house — and even the water in the pool — is heated by the sun. What’s more, the same solar energy system cools the house in summer! Tapping the sun’s of enormous energy is a dream now being realized. Not only will solar heating be of great economic interest to householders, it is of urgent and growing importance in the face of diminishing natural resources. Visionary ideas like solar heating are one thing. Making them work is another. Stainless and alloy steels are playing key roles in the realization of this and other advanced ideas  . . .

Another retro-futuristic stunner by Jo Kotula, illustrating a 1958 ad for Vanadium Corporation of America. 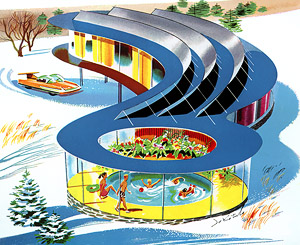 ≈ Truss of the Future

An evocative illustration by an anonymous artist for Butler Manufacturing, maker of prefab metal buildings, back when barnlike churches and hangarlike schools were just a glimmer in some young architect’s eye. 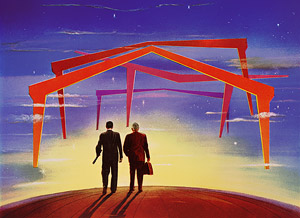 This 1958 illustration for Bank of America is by the California artist Amado Gonzalez, last seen on our pages quite a while back (1955) in the frozen food case. 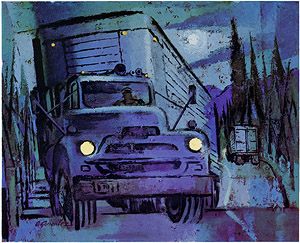 Very low, very daring  . . .  a new adventure in style! Only rarely does a new car appear on the scene so brilliantly designed that it has no counterpart. The Swept- Wing 58 by Dodge is such a car. It is a car of noble proportions — clean of line, daring in sweep, low in silhouette — beautifully simple in every detail. You can see the simplicity in the smart new grille, handsomely styled and in perfect taste. In the flat, taut hood. The vast new Sweep-View windshield. The smooth, unbroken line from bold Twin-Set Headlights to soaring Swept-Wings. Expect to see a great many people step out in a low-slung Swept-Wing Dodge in the months ahead. Wouldn’t it be fun to be one of them?

The cover of Form DMA-4000, a Dodge sales brochure printed in September 1957. The 1957 and 58 Dodges were some of the best-looking cars of the decade. 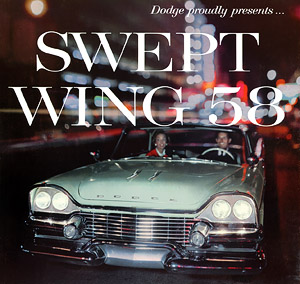 This imaginative but technically accurate illustration shows a permanent satellite being constructed in orbit around the Earth. It generates its own heat and electricity from solar rays. Basic vegetation such as algae for oxygen as well as protein-rich foods are grown in hydroponic tubes in upper-level “greenhouses.” New vistas in astronomy will be opened up by such a space station, because of perfect conditions for photography and spectroscopy. It will also provide unique conditions for advanced research in physics, electronics, weather prediction, etc. Three such stations, properly placed, could blanket the entire world with nearly perfect TV transmission. Atomic rocket vehicles with prefabricated skin layers provide building materials for the station, then return to Earth. Similar craft will service an established station, docking by electromagnetic pull exerted from lower section of the station’s axis. Inertial navigation systems will play an increasing role in the exploration of outer space. Arma, now providing such systems for the Air Force Titan and Atlas ICBMs, will be in the vanguard of the race to outer space.

This retro-futuristic illustration by Frank Tinsley for the defense contractor American Bosch Arma was part of a series of about a dozen ads that ran in 1958 and 1959 at the dawn of the Space Age . 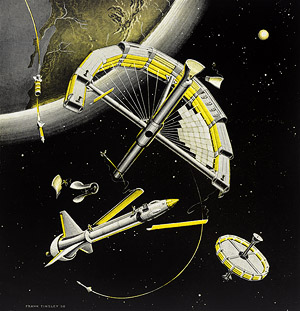 Spreading its wings to absorb the eternal flow of solar energy is the Cosmic Butterfly, a space vehicle of a type first conceived by Dr. Ernst Stuhlinger of Redstone Arsenal. Each of the 50-foot parabolic mirrors in the wings concentrates the Sun’s rays on the boiler at its focal point. Steam is developed, which drives a 200-kw turbine generator in the base. Cooled by frigid outer space in heat diffusers, the steam reverts to water and is pumped back to the boiler to be used over and over again. The current thus generated drives the main propulsion unit, an ion rocket in which powerful electric fields accelerate charged particles, shooting them from the rear of the rocket exactly as the electron gun in your TV set bombards the screen. Sunlight, then, is the power source, whereas cesium is the propellant material. While the recoil thrust is relatively small, the weightless vehicle is operating in a vacuum and the push is enough to enable the Butterfly to reach interplanetary speeds. Unlike conventional rockets, the Butterfly is under power the entire trip. Halfway to its destination, it turns around, and the ion thrust is used to slow the craft down to arrival speeds. Since its thrust is entirely inadequate to cope with the gravity of major planets, the Cosmic Butterfly never lands. It is assembled in space and shuttles between artificial satellites. The Cosmic Butterfly could carry 10 passengers and 50 tons of cargo from an Earth satellite to a comparable one orbiting around Mars in about one year of continuous travel.

Another Tinsley illustration, this one from 1959. There are five or six more scattered around the Ads section. 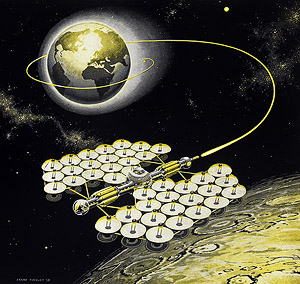 Travel light in Plateau — the topcoat with the “weightless” feel. Comfort without bulk or burden — that’s what you get when you choose a Plateau Coat. Made of rich, lustrous 100% worsted — an exclusive Pacific fabric that has been pre-laxed in the loom to remove tension and give you that “weightless” feel. By Timely Clothes, in a choice of eight solid shades, $60. With zip-in lining, $70.

We puzzled over this illustration by someone whose signature we can’t quite decipher, and concluded that Doris Day’s shocked visage and the porter’s expression of delight are due not to the exceptional beauty of Joe Lightraveler’s new topcoat, but rather the fact that he’s embarking on a long trip with just one piece of luggage. 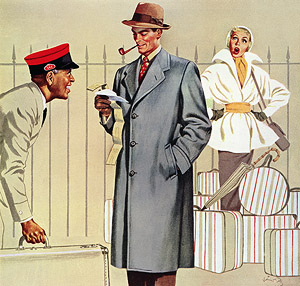 Welcome ashore  . . .  to a new kind of Go! The ’57 Ford is a captain’s paradise. Its new kind of Thunderbird V-8 engine is the next best thing to having atomic power. In looks, this new kind of Ford rules the raves. It’s got the long, low sculptured look of tomorrow. Even standing still it looks in a hurry. Inside, there’s oceans of space! And Ford alone, in its field, offers two new, bigger car sizes for 1957. The Fairlane Series stands over 17 feet long — the Custom, over 16 feet long. And Ford’s body beautiful is built strong as a battleship. The fleet’s in! So visit your local authorized Ford Dealer and climb aboard the new kind of Ford for an Action Test. You’ll leave ’em all in your wake! 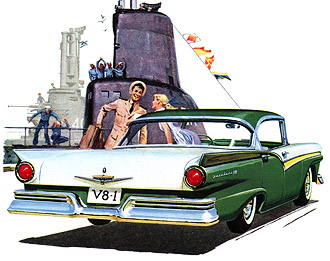 From 1954, an illustration by Haddon Sundblom of Coca-Cola fame for the U.S. Brewers Foundation. No. 100 in the series “Home Life in America,” this was titled “After the Game.” Happy Mother’s Day to all you moms out there! 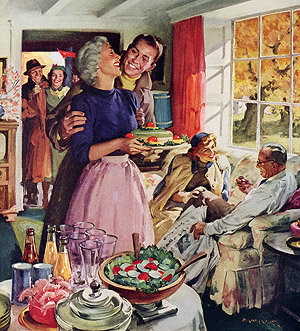 A nice illustration for Coke with the signature Francis Chase. This may have been Theodora Larsh, the miniaturist painter (1887-1955) known professionally by her married name, Francis Dane Chase. 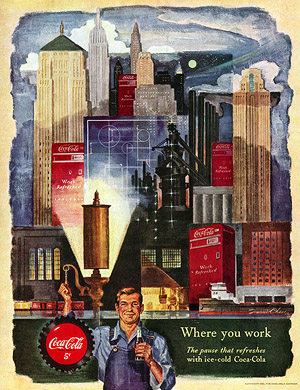 From 1951, an array of Oldses colorful as two-ton Easter eggs. 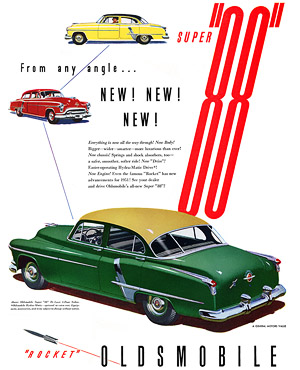 The illustration for this outdoorsy Eveready flashlight ad from 1956 is by Kenneth Southworth Davies (b. 1925), noted still-life painter and art instructor, as well as creator of the logo for Wild Turkey bourbon. 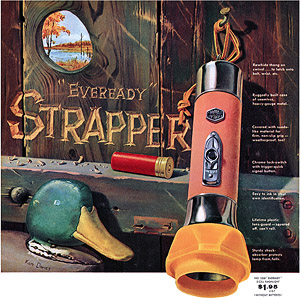 Ford brings to America an exciting new kind of automobile — the Thunderbird — a personal car of distinction. No matter what your tastes or what you expect in a car, you’ll find a new world of enchantment in the Thunderbird. Once you see Thunderbird’s low, lance-like lines, chances are you’ll never forget them  . . .

Cover art from the 1955 Thunderbird catalog, which introduced the concept of the “personal car” to American motoring. After its redesign as the four- seater “Squarebird” of 1958-1960, the T-Bird achieved sales success beyond its creators’ wildest dreams. 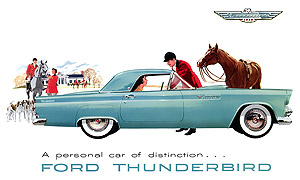 For 1961, DeSoto proudly presents a fine new car. It is a new car rich in traditional DeSoto quality, fresh in the way it looks and performs  . . .

For its final model year, the DeSoto lineup was trimmed to just two cars, the generically named Four-Door Hardtop and Two-Door Hardtop. On November 30, 1960, Chrysler announced the brand would be discontinued, although the name lived on overseas.

Foam light, foam bright, first foam to feel just right. That’s urethane plastic foam — firm enough to support a boy standing on it, light enough for him to lift it above his head. You’ll find it everywhere in your home — as durable upholstery, resilient carpet underlays, warm quilts, washable toys. Urethane foam is based on Barrett Division’s PLASKON polyester resins and NACCONATE isocyanates, a product of National Aniline Division  . . .

Not just better living through chemistry in 1959, but better advertising, too, from Allied Chemical. 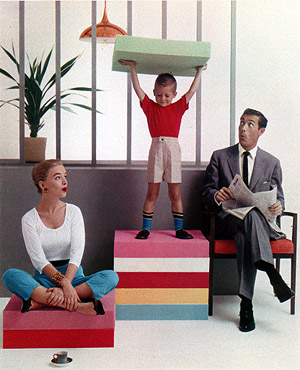